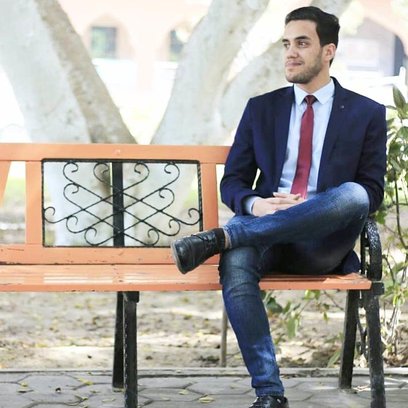 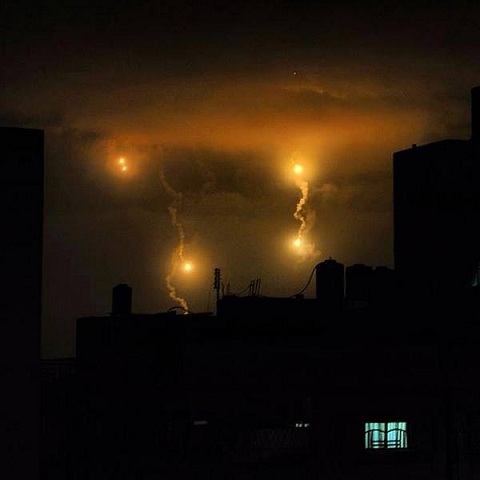 I am sitting at my desk, writing what I hope will be an evocative piece of writing although it is 2 a.m. The reason why I'm willing to write at this particular time because the power is on–FINALLY. It has been off for 12 hours, and that is pretty much typical for Gaza right now. (It’s supposed to be on for eight hours, off for eight hours, but lately it’s on for only six and off for 12. During the 2014 Israeli assault, I remember the agony of only having electricity for four hours a day.)

Like many Gazans, my siblings tend to celebrate the arrival of power on by screaming and running all over the house. Why? To turn on every single device that relies on electricity, including the TV, computers that need to be charged and, of course, the fridge.

To be honest, none of the ordinary people understand who is to blame for our lack of power. But the media say this: Gaza requires about 400 megawatts of electricity a day but only has 212 megawatts available, of which Israel provides 120 and Egypt supplies 32. I blame Israel ultimately for our problems, because our own power plant was bombed in 2006 and we’ve never been able to fully rebuild it.

I remember the day when the plant was hit again in 2014, causing plumes of smoke for days. The firefighters were unable to contain the burning fuel. As a consequence, the sky was shrouded with thick black smoke. Although the plant is located in Al-Nusairat refugee camp, I could see the smoke clearly from where I live, in Dair El-Balah city.

I went cautiously upstairs to the rooftop of my house to see what was going on, a scary experience since the moon was hidden by clouds. Even turning on my mobile flashlight seemed to be risky in light of the bombing. (Families often fill their rooftop tanks with water at night so it will warm up under the sun during the day—needed because of the electricity shortages. We use mobile flashlights to light the way up the stairs.) It was dark, very dark, indeed. When there is no electricity or even moonlight, you stumble and, every now and then, get hit unexpectedly by a door or something while feeling your way forward.

Ironically, pilots of warplanes believe our flashlights are signals from resistance fighters. BOOM. Yes, they bombed people who used mobile flashlights to help them  move around on rooftops.

Later, I returned downstairs. Suddenly, while looking out of the window, I witnessed a huge orange light coming up from nowhere.

"What is that?" I shouted, terrified and surprised.

I thought at first it was the sun, but logically I knew that sunrise at night was impossible.

Each one of my siblings, as well as my dad and mum, rushed to the window. (However, it was really just the opening where the window used to be, since we always remove the glass during wars so that we won’t be hurt by flying glass from shrapnel and such.)

Then I realized it was some Israeli flares fired down at us for discovery purposes, to see who was moving around on the ground. If anyone “undesirable” was seen, then BOOM once again.

That night was like a nightmare, and it had big impact on me. I was unable to sleep. Before, I had never been interested in keeping up to date with the news. However, the Israeli occupation forces succeeded in making me addicted to it. I started becoming obsessed with  politics, which I detest so much since it usually comes along with killing, bombing and invasion. To me, monitoring the news was like a drug I couldn't stop taking. I began to wish  to be a political analyst who speaks to the media when I grew up.

As the days went on, an unrecognized number appeared on the screen of my phone while I was baking bread with my mom. I decided to respond, although I was afraid that after I hung up, the house would be blown up. But instead, I recognized the voice of the person talking, and I was relieved to know it was a friend from America calling to check in on me. His name was Brad, and he wanted to be sure it was really me talking.

"Hello,” I said, waving my hand despite the fact that he could not see me. “This is really me talking, Ahmed Elqattawi." But I had a bad intuition about it.

"It is your voice, I know. It sure is,” he said, shocked. “But there was a guy called Ahmed Elqatrawi who was killed, and we thought it was you."

Ahmed Elqatrawi was actually a guy from the West Bank who had been killed by Israelis. I can't recall why or even how he was killed. He was killed, nonetheless, right at that time.

As I listened to him, I figured out that in the Facebook world, I was a dead person. All of my American friends started sending condolences to me, and crying about losing me. I was anxious to go online and reassure everyone I was not dead.

While at the café, a house was targeted by a drone rocket just one block away. I had forgotten my mobile at home and I couldn't make up my mind whether to leave for my house to check on everyone or stay at the café. Scared, my heart started beating fast. I decided to run toward my home. When I got there, everyone was fine, and my dad was shouting at me for being out.

All of the condolences I received that day were taken back, since Brad told them I was still alive. But his intuition wasn’t wrong. I wasn't murdered that day, but two maternal cousins were, who had a place in my heart.

As the days went on, four families from my dad's side fled to our house, which made me scared we would be targeted, too. Drones were flying at low altitude, monitoring everyone’s moves on the ground.

We helped everyone who came. We let them stay in the house of my uncle, who was living in Egypt. We also gave them blankets, food and water. We let them share our roof tanks, which rapidly shrank on a daily basis. Electricity was necessary to fill them.

I have come to the conclusion that war is not only a time of walking in people’s funerals, but also a time for showing what kind of person we are. Cooperation and generosity are what defines a family.

I am from Gaza, and I am not a number
Please donate to keep this project going