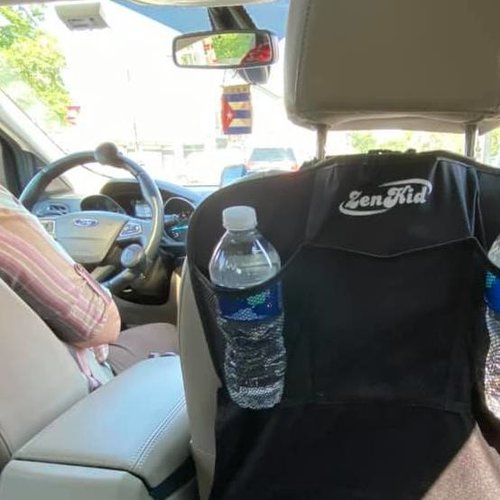 I don’t  usually like chatting with Uber/Lyft drivers because I like my trips as quiet as possible or even take a nap if it’s a long one. Sometimes, though, I come across drivers who are so pleasant and interesting they grab my attention. Then I end up talking to them even if I don’t feel like it.

My driver today was Melissa, a Cuban American in her 50s. I was 3 minutes late to meet her because I was hurrying to throw away the trash first. But thankfully, I received a message from her saying, “Take your time,” with a smiley face. I realized then that my driver was special.

Her car was clean and the air conditioning was the way I like—on, but not too strong. Central African Soukous music was playing. While I was buckling up, Mellissa turned the music down and offered me some chocolates, ensconced in a small, decorated box. I thanked her and apologized; I stopped eating most sweets recently for the sake of my teeth.

“Do you speak Palestinian Arabic?” she asked. I wondered how she knew I was Arab. Maybe from my name? But Mohammed is common among non-Arabs as well. Not every Mohammed/Muhammed/Mohammad/Muhammad is Arab. And how was she so sure I was Palestinian? These were my thoughts in the first couple of seconds before I answered her question.

“I have no idea. I just can tell from the eyes!”

Half of my face was covered with a mask, but she was right… I am Palestinian!

“My aunt’s husband is Palestinian from Haifa,” she continued, “He came to the States in 1978, a few years before I came with my parents from Cuba. I was a kid who just followed her parents to make their dreams come true.” She paused for a moment. I imagined that she was remembering her childhood as a daughter of immigrants and the hardships experienced by her parents.

“Every week, I saw my parents for only a few hours a day on the weekend. They worked from morning to late night, six days a week,” she said, confirming my speculation.

Life in the U.S. is pretty expensive, especially for those with low incomes and newcomers to the country. If you don’t work for long hours, it’s hard to cover the expenses of housing, food and transportation. As someone new to the U.S., I can relate to their struggle.

Then Melissa continued: “I can’t remember any beautiful moments for almost the first three years after we came here. And then I lost my mom!”

I fell silent. “I am sorry for your loss!” I ventured.

Her words brought tears to my eyes.

“I don’t tell this story to just anybody,” Melissa told me. “Not everyone understands how I feel. But I I told you because you people have been suffering since 1948, and the situation in your country is getting worse and worse. The number of Palestinian refugees outside Palestine is in the millions. My country, Cuba, has the same story.”

Abruptly, she said, “We are almost there…” And, to be honest, I wanted her to stop talking about her pain because it reminded me of my own pain. Nevertheless, I asked if she knew any Arabic.

Mellissa rattled off some common Arabic words her uncle had taught her. She said she knew how to curse in Arabic as well but didn’t mention them. I thanked God she didn’t curse because I barely do and I don’t like listening to cursing.

Then she dropped me off and drove away. I still can’t figure out how she knew I was Palestinian.

Like thousands of immigrants, all Mellissa wanted was someone to listen to her story who could understand. Many people will never be able to understand what it’s like to be a migrant, always “in between” our original homes and our new ones, even if they listen to the stories day and night. We are stuck between the hammer of not being able to return to the home of our ancestors and the anvil of uncertain status in our host countries.