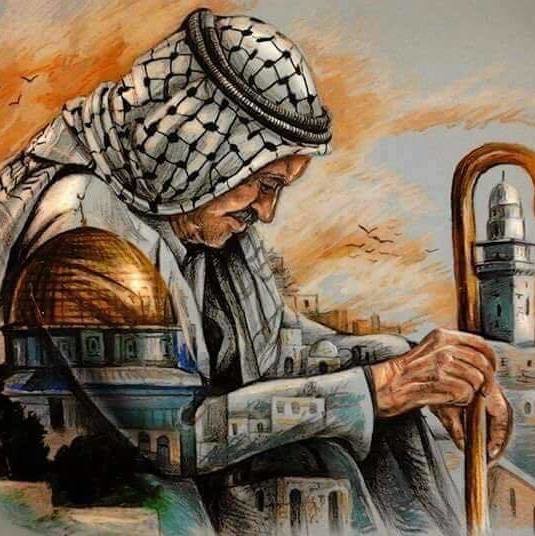 I was born in an unidentified place.
My friends called it *mukhayyam.
My grandfather told me it’s for refugees.
They were forced to leave a country called Palestine.
And then I realized…I am a refugee!

It was Friday night, a rainy one.
I rushed to my grandfather, sitting by himself thinking.
We lived in a makeshift home, made of tin plates.
The ceiling leaked rain water.
Lightening flashed, thunder boomed and cold seeped into our bones.

I laid my head in my grandfather’s lap.
He wore a checkered, black-and-white kuffifyeh.
It covered his gray hair and parts of his neck and shoulders.
He wore *fallahi dress, leaning on a mahogany cane.
What looked like a metal stick protruding from his pocket.

He talked, trying to distract me, I think, from fearing the night.
He grew up on a big farm with orange and olive trees,
and goats for milking.
His family made cheese, yogurt and curdled milk.
From the trees they picked olives for pickling and oil.

His oldest sister married, in a large, traditional ceremony at the family home,
with the guests singing *Jafra and dancing the *dabkah
along with his brothers and friends.
It was the last time he remembered being truly happy.

But they were forced to leave the farm and the wedding.
Instead, their home now was the *mukhayyam, they thought temporarily–
For one or two months, maybe a year.

They never could find a way to leave though.
They had forfeited everything. Except the key.
The key to the farm and the home!