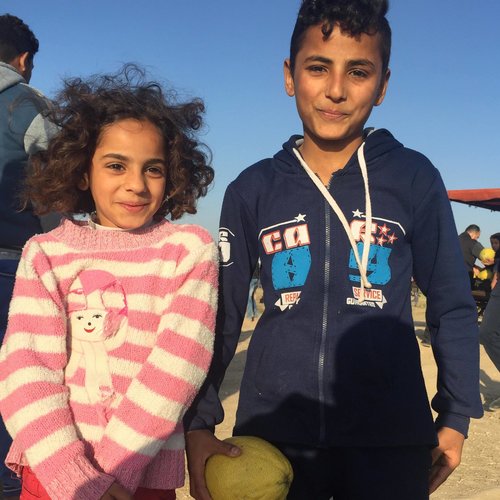 After the bloody launch of Gaza’s Great Return March—16 Palestinians killed and more than 1,500 injured—the question almost hangs in the air: What now? Will the protesters pack up their tents and retreat to the meager shelter of their homes? Or will they persist in their plans to demonstrate along the border with Israel until May 15, the anniversary of the Nakba (when the families of many Gazans were forced from their homeland to make way for the creation of Israel)?

The masses (estimated at around 60,000 on March 30) are no longer there; Fridays are traditionally the Palestinian day of protest, as they struggle to earn a living during the week. But if the families and individuals who remain in the protest tents to “hold the line” are at all representative, the Great Return March is far from over.

“Israel's policy of destroying our identity is summed up in a statement from [David] Ben-Gurion [the first prime minister of Israel]: ‘The old will die and the young will forget.’ But we are here to say that the old may have died, but the young are not forgetting," said Mohammed Madi, a lawyer occupying one of the tents.

East of the Al-Shujeya neighborhood, the protesters—although much smaller in numbers than the launch days—have gathered between the fenced border and the first row of houses recently rebuilt after they were destroyed during Israel’s 2014 war on Gaza. Visitors to the “alley,” about 500 meters (a third of a mile) in depth, find a mix of contradictions and irony. Marketers working from carts loaded with nuts and candies and vans with fruits and juice shout to passersby to sell their refreshments. And in their midst, an ambulance and nurses try to save the life of a young man shot by Israeli snipers. (Thanks to Allah, he lived.) Not too far away was a mass of protesters, raising the Palestinian flag and shouting for freedom and the right to return [to their homeland]. Life and laughter mixed with pain and tears.

It was day 2 of the Great Return March and entire families marched a few hundred meters from the fence. In a row of tents, each was labeled with the name of a town from historic Palestine [now Israel].

One of the tents was decorated with Palestinian and Algerian flags; at the entrance, pots with Arabic simmered over a fire.

Madi, 47, explained: "I am a dual citizen, with both a Palestinian and Algerian passport. I raised the Algerian flag as a symbol of liberty because it is the country of a million martyrs [in the fight to end French colonization]. But I chose to stay in my original homeland and fight for it because Palestine needs true human rights defenders. It is a matter of truth that all oppressed peoples shall be liberated one day."

Along with his wife and three children, Madi set up his family’s tent two days before the demonstration started. During the demonstration, he opens his tent to visitors, encouraging them to continue protesting. For Madi, the success of the March of Return will not be measured in terms of injuries or whether the international community actually tries to force Israel to allow Palestinians to return (after 70 years, few Palestinians have any illusion about that). Rather, he says, the march is intended to keep the flame of resistance alive among youths who have grown up knowing nothing but blockade and occupation. No wonder Madi, whose family originally lived in Bait Jerja (now Israel), even brought his 6-year-old daughter to the protest.

“Anyone looking into the faces of the masses here will see that even our young ones will never forget their homeland,” said Madi, who has been imprisoned by Israel four times, for a cumulative two years. He plans to stay at the demonstration every day until May 15.

Yusra (who didn’t want her last name used, for fear Israel would stop her from traveling) is 50 years old and originally from Bait Dras, near Ashdod [now Israel].  She echoed Madi: "My parents used to tell me every day about our home in Bait Dras. We had around 50 farms there, all planted with fruit," she sighed with nostalgia. "Some people think we have forgotten our land. We have not and will not. I am participating in this march, and I will keep participating until the last day. I feel more connected to the land the closer I get to the border fence."

Yusra came to the protest with her 13-year-old son to remind him of his right to return.

"Mom wrote a book about her original town, in which she described everything that was there. The more I read it, the more I get attached to the land and the more I am determined to demonstrate here," he said. His two older brothers were among those closest to the border fence.

Although the Israeli forces are using all means possible to disperse the protestors—from teargas bombs to live ammunition to drones—none of those interviewed said they will stay home. In fact, many, like Yusra, are there with their children.

"I came with my family on my own; no one forced me to," said Amna AbdelAl, 9. When her brother asked if she was afraid, she immediately replied she was not.

"I came here because I want to protect our land," she said defiantly.