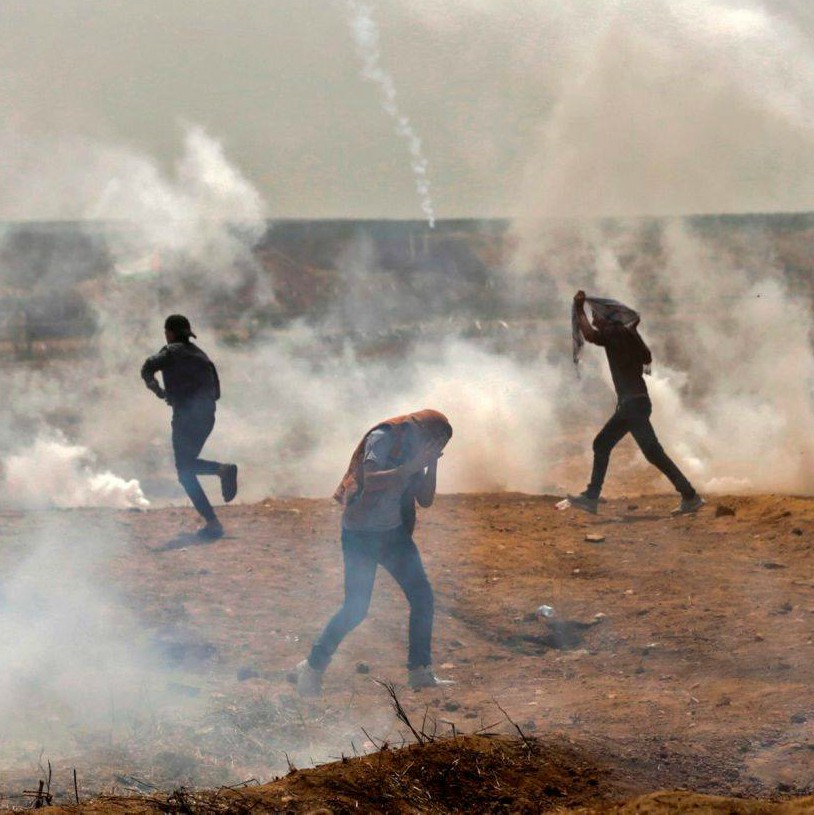 Israeli forces have been using the Great Return March and its thousands of protesters as a sort of “testing ground” for new forms of weaponry and crowd control, say physicians in the Gaza Strip. They talk of exploding bullets and and an unknown gas that causes severe convulsions and loss of consciousness, among other symptoms.

“We are being used as guinea pigs to test new weapons, as we have in past Israeli wars on Gaza,” says Ashraf al-Qedra, MD, spokesperson for the Gaza Health Ministry.

The most damaging of the new weapons are explosive bullets, which shatter into many fragments in the body. To date, local government statistics show that 1,935 unarmed protesters have been shot by Israeli snipers with live bullets. No estimate is available for how many of those involved “exploding” bullets, but in the experience of Doctors Without Borders (Médecins Sans Frontières, or MSF), it’s high.

“Half of the more than 500 patients we have admitted in our clinics have injuries where the bullet has literally destroyed tissue after having pulverized the bone,” says Marie-Elisabeth Ingres, head of the MSF mission in Palestine. “These patients will need to have very complex surgical operations and most of them will have disabilities for life.”

Ingres adds that the number of injured treated in MSF clinics in Gaza since the protest began March 30 is more than the number seen throughout all of 2014, when Israel launched its last major war on the Strip.

"This type of ammunition is unfamiliar to us," says al-Qedra. "What is so damagng about this type of bullet is the path it takes in the body."

An explosive bullet shatters into fragments in the body, often at high speed. It smashes through organs and tissue, shreds blood vessels and pulverizes bones.

Among the victims of these explosive bullets is the slain journalist Yasser Murtaja, who was hit in his abdomen and died after 12 hours of severe bleeding, and the 11-year-old Abdelrahman Nofal, one of 701 minors injured in the protests to date (along with five killed). Doctors were forced to amputate one leg, in which they said several bones were literally missing and his blood was “poisoned.” Fragments from the exploded bullet penetrated the boy’s other leg as well, but it was saved.

"Yasser Murtaja couldn’t recover from injury because the bullet fragments destroyed his colon, spleen, liver and ureter. He died despite having two surgeries,’’ explains al-Qedra.

In a call for an international arms embargo against Israel, Amnesty International states, “Many [protesters] have suffered extreme bone and tissue damage, as well as large exit wounds measuring between 10 and 15 mm, and will likely face further complications, infections and some form of physical disability, such as paralysis or amputation. Reports of the high number of injuries to the knees, which increase the probability of bullet fragmentation, are particularly disturbing. If true, they would suggest that the Israeli army is intentionally intending to inflict life-changing injuries.”

Amnesty goes on to say that a forensic pathologist who reviewed photographs of the injuries reports that they some appear to be caused by U.S.-manufactured M24 Remington sniper rifles filled with 7.62 mm hunting ammunition, which expand and mushroom inside the body.

Another new tactic Israel is using to disperse the protesters is a type of chemical with effects much more severe than the typical teargas. Canisters containing the new type of gas are either dropped on the crowds by drones or fired by soldiers.

‘’It’s a dangerous chemical weapon that causes bizarre symptoms we’ve never seen before: violent convulsions, severe shaking in all parts of the body, coughing and vomiting, fast heart rate, an increase in body temperature and loss of consciousness for more than an hour,” says Ayman al-Sahabani, MD, head of the emergency department at al-Shifa Hospital in Gaza City. “We took blood and urine samples from patients to determine the composition of this chemical, but have not been able to identify it.’’

To date, government statistics show that 820 protesters have been injured by inhaling some type of gas, including this unidentified chemical. Even protesters who stay 800 meters away from the separation fence have been succumbing to the effects of the gas. “Dozens” of them, doctors say, have returned to the hospital after being released because they experience symptoms once again.

Gaza’s hospitals are overwhelmed with the number of injuries caused by Israeli snipers; not knowing just what they are dealing with when patients come in makes the odds of patients’ survival that much lower.