He followed in her footsteps

Home » He followed in her footsteps 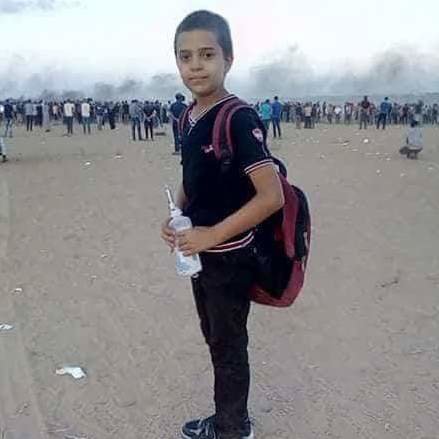 He heard about the protesters going to the borders,
to ask for their rights and the world’s attention,
to end the occupation, oppression and siege.

His sister went to help the injured;
she is a volunteer paramedic,
because she is unemployed… like the rest of Gazans.

On Friday, they talked, as always:
“I want to accompany you…” he begged her,
“I want to help the helpless!”
He was only 12, so she refused.

But there were no other places to go,
no playgrounds, public parks or swimming pools;
Gaza is a crowded place;
full of pain, boredom…and hope.

He followed his sister, eager to help,
carrying his school backpack and childhood wishes.
But in the crowd he became lost, soon losing his way;
Unlike other kids, he didn’t fear the night and kept going.

With the help of her friends, she looked for him for hours.
She didn’t find him or even his body.
She instead saw a young, white dove flying over the fence,
Heading fast and fierce toward their ancestral homeland.

It was at that moment, with tears of alarm beginning to fall,
she heard the voice of a medic: “Unidentified body of a child!”
Her heart stopped, then beat fast.
Grief already rising in her throat like a gag.

She rushed to have a look;
She already knew it was her brother!
She was more than sure it was him.

Yes, it was him!
His face was pale, with eyes half open,
an expectant smile still on his lips.
His hand still clutched a bag of saline;
He had hoped to treat the injured just like her.

He carried no guns, no bullets, no shield.
He had neither grenades nor rockets—just a school bag!
His white shoes now were spotted with blood,
and his shroud quickly dampened with her tears.

She wished he was asleep.
He was not; so she wished she was a dreamer.