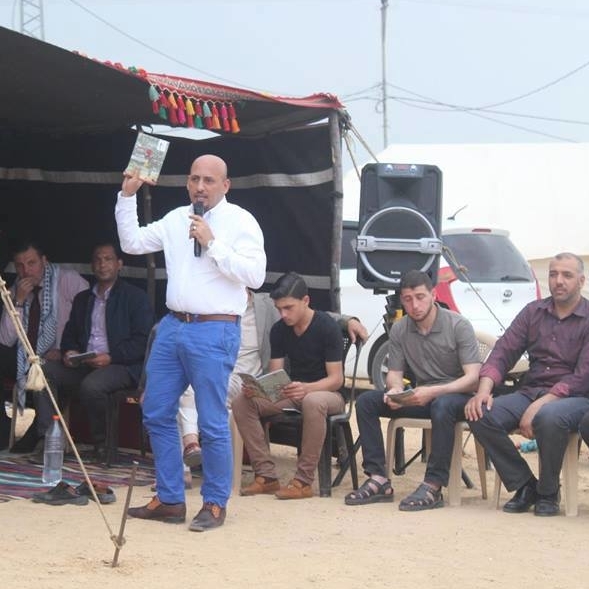 Gaza’s Great Return March may seem like it heralds a new era of struggle in the Palestinian-Israeli conflict, but Yehya Qaoud, a 37-year-old activist and political researcher, says it’s actually just one in a long series of nonviolent resistance campaigns waged to confront the occupation.

And, just as the largely nonviolent First Intifada culminated in a peace agreement (the Oslo Accords, which ultimately lacked the teeth needed to produce the intended results), Qaoud believes the march is the vehicle today’s Palestinians will use to push for the right to return to their ancestral homeland—a demand legitimized by UN Resolution 194 but too often forgotten by today’s politicians.

“We’ve gained nothing from numerous political negotiations with Israel. At the same time, armed resistance has cost us too much,” says Qaoud, who is on the staff of Gaza’s Palestinian Planning Center. “Nonviolent resistance takes a long time to succeed, but it is the only method for to exposing Israel’s brutality in a way the world will truly see.”

The author of many articles on the history of nonviolent Palestinian resistance, Qaoud has launched a series of lectures at the march to spread awareness of the efficacy of these tactics among youth. Among the examples he features are icons Mahatma Gandhi and Nelson Mandela. Joining him as an instructor is Wael Abdela’al, a university lecturer, who offers tips for countering the “fake news” published in the media that malign the march as violent and Hamas-controlled. Instead, he teaches participants how to use the same tactics to show the peaceful face of the demonstration, such as the many cultural activities that take place.

Qaoud opposes teams at the march who have assumed names such as the ‘’Tire- Burning Unit,’’ “Tear Gas Unit” (for those who sport medical masks and onion stalks as symbolic resistance to Israel’s toxic gas) and “Fence-Cutting Unit.”

‘’I don’t favor adopting names like that, since they have a military flavor, which is not what we are aiming to show in the media,’’ he explains.

Ahmed Abu Ratima, the 33-year-old activist who developed the initial concept for the march, agrees—even opposing the burning of tires to impede the vision of the Israeli snipers.

‘‘Burning tires doesn’t threaten Israeli soldiers in any way, but perception is what is important. We want purely nonviolent demonstrations that offer no opportunity for our opponents or biased media to call them riots.’’

However, with an activity as large and democratic as the march (only a loose coordinating committee exists), control over everyone is not possible. Thus, for example, some Palestinian protesters vandalized infrastructure Friday at the Kerem Shalom crossing–provoking Israel into closing it to all goods. Such tactics, says Abu Ratima, plays into the hands of the Israeli government, which has tried to disparage the demonstration as violent and directed by Hamas.

Qaoud attributes the decline in fatal sniper shots as the march has progressed to Israel’s inability to provoke most of the protesters into violence and the increasingly negative international media coverage. Likewise, he speculates, Israel fears sparking a third intifada, this time even more powerful because it would be truly nonviolent.

A third intifada is, however, is what is coming next, Qaoud and the others predict. Eleven years of blockade is too much, and the pain of the harsh economic conditions in Gaza is being exacerbated by U.S. President Trump’s recognition of Jerusalem as Israel’s capital and his decision to withhold funding for the UN agency charged with serving Palestinian refugees (UNRWA).  What will happen at the march in the coming days is uncertain, but what everyone seems to agree on is that it will not end as originally planned on May 15.

‘’We call upon the international community to support our cause and take serious actions to help us achieve our freedom. Instead of telling us to remain silent, why can’t they enforce the UN resolutions they have passed and tell Israel to end its brutal occupation?’’ Qaoud asks.