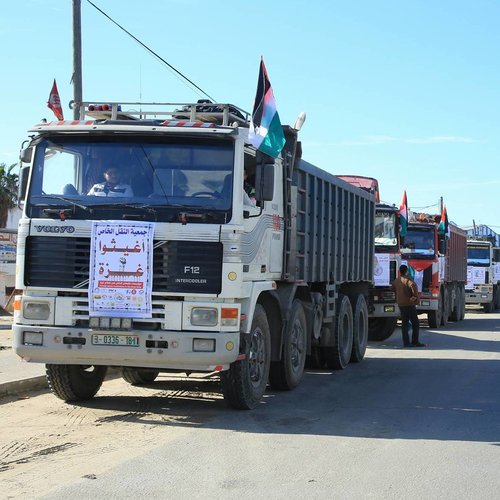 In their third and largest strike this year and the latest in what they pledge will be ongoing protests until they get relief, the drivers of about 120 transport trucks in the Gaza Strip refused Wednesday and Thursday to pick up or deliver goods via Israel’s Karem Shalom crossing point.

“We all bought trucks so we could work and earn money,” said one of the participating drivers, Khalil al-Okkah. “I used to be able to transport 17 or 18 loads of goods a month. But in January, I was down to three and this month, it looks like it will only be two. By the time I pay for gas, taxes [imposed by the Fatah-dominated Palestinian Authority (PA)] and license fees [paid to both Israel and the PA to use the crossing] I’m basically earning nothing; I can’t earn a living. We want to live.”

The strike was organized by the Special Transport Association with the cooperation of the 20 organizations representing the various commercial sectors in the Strip. The association also coordinated the first of the strikes, which occurred on 22 January, and the second on 6 February. Each strike has drawn more participants, who have coalesced around demands that are at once both basic and ambitious. At a planning meeting called Monday, just prior to Wednesday’s strike, these demands of the Israeli government were outlined:

Allow Gazan Palestinians to work in Israel. After the outbreak of the second intifada, the number of Gazan workers allowed into Israel declined from 16.5 per cent of the total workforce  in 1999 to 12.7 per cent in 2000. The most dramatic drop, however, occurred when Hamas took over governance of Gaza and Israel banned the Strip’s workers totally. Today, unemployment in Gaza is the highest in the world—nearly 50 per cent, and even higher among youth.

Permit more raw materials to be imported into Gaza, along with more exports to Israel and abroad. As part of the blockade imposed in 2007, Israel completely banned exports. Although the ban was partially lifted following Israel’s 2014 war on Gaza, a range of other constraints—including restrictions on imports of raw materials needed for construction and manufacturing—has largely negated the impact. The average monthly export volume is still only 17 percent of the norm before the blockade. According to Jihad Isleem, secretary of the Special Transport Association, the volume of exports in 2017 was worth 3 million shekels, compared to 3 billion in imports.

However, the truck owners also blame their troubles on the Palestinian Authority and the nascent “unity government” mandated by the reconciliation between the rival political parties, Hamas and Fatah.

“We definitely support the reconciliation, but it must be effective for the people,” said Isleem . “Rami Hamdallah [prime minister of the reconciliation government] said on 15 November that the new government would make the situation in Gaza much better, but nothing has changed. In fact, our economy is worsening. Gaza is at death’s door.”

The truck owners and drivers are calling on the PA to:

Suspend for five years the taxes recently imposed on businesspeople in Gaza, in recognition of the Strip’s collapsing economy. In January, President Mahmoud Abbas issued a decree that imposed a variety of taxes, including a 17 per cent value-added tax on imports and a 20 per cent income tax on companies. The truckers also call for an easing of the process required to obtain a license to access the Karem Shalom crossing, and a 50 per cent cut in the associated fees. (According to Nahidh Shuhaiber, president of the transport association, truck owners must pay 500 shekels in crossing fees to Hamas, along with 700 shekels to the Israeli government.)

Reduce the cost of fuel. After the signing of the reconciliation agreement on 12 October, the PA moved to grow its revenues by increasing the cost of fuel by 1 shekel per liter—enough to create severe hardship for those who depend on transport for their livelihood. According to Isleem, the cost of Egyptian fuel, which used to be an affordable option, now equals the more-expensive Israeli alternative.

“Sixty percent of a trucker owner’s income now goes to buying gas, 15 percent goes to the driver and 16 percent goes to taxes. What’s left isn’t enough to pay the other expenses, such as maintenance and license fees, much less support a family,” said Isleem. As a result, he added, about 60 percent of truck drivers aren’t able to work anymore and many more are in jail for owing money.

And the impact is broader than one family. Isleem pointed out that each truck, often shared by up to three partners, supports 16 other sources of income, from mechanics to accountants.

What good will protests do? Isleem and Shuhaiber are convinced they can work. Even the Israeli press is reporting concerns that Gaza is reaching the end of what the people can endure. In response to the February strike, the Israeli government issued about 480 more permits for merchants wanting to enter Israel and permitted 36 more transport companies to do business. They also credited the strike for persuading Israel to pressure Egypt into opening its Rafah Crossing that same week for two and a half days.

Originally published by The New Arab.