Eyewitness account: Beirut’s beauty vanishes in the blink of an eye

Home » Eyewitness account: Beirut’s beauty vanishes in the blink of an eye 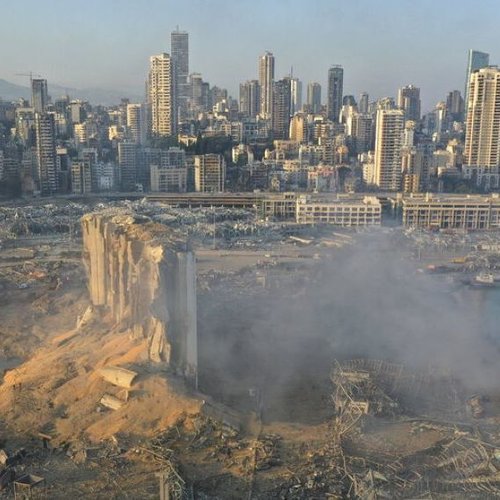 2020 has proven to be the worst in the 21st century in so many ways. First, COVID-19 and its economic “tsunami.” Then August 4 and the massive explosion that leveled much of downtown Beirut–once known as the “jewel” of the Levant.

First thought to be a salvo from a foreign enemy, the explosion was revealed in the following days to be caused by a fire that blew up nearly 6,000 tons of highly explosive ammonium nitrate, commonly used in fertilizers. At last count, at least 160 people died and 5,000 were injured. Others are missing and an estimated 300,000 are homeless. Already struggling due to a corrupt government and deteriorating economy, Lebanon is on its knees. When I first saw the video footage on TV, flashbacks of the Israeli assaults on Gaza left me dizzy and trembling.

Lebanon is special to me and so many others because it also is home for an estimated 450,000 Palestinian refugees and around a million Syrians who fled their civil war in Syria. One of the Palestinian refugees is Zeinab al-Hajj, whose family fled Amuka village near Safed in the Upper Galilee in 1948 (the year of the Nakba, when they were evicted from their homeland). Today, she lives in the sprawling, densely crowded Shatila refugee camp.

Although Zeinab earned her master’s degree in business from Beirut Arab University, Palestinians are restricted from many jobs and communities. When a ban on “foregin workers” began to be strictly enforced last year, Zeinab lost her job as executive secretary in a big Saudi aluminum manufacturer in Beirut, where she had worked for about 14 years, (It is quite ironic for Palestinians like Zeinab to be considered a foreigner, since she was born in Lebanon!)

On the day of the explosion, Zeinab and her brother were visiting relatives in Nahr al-Bared refugee camp near Tripoli in northern Beirut. On their way back to Shatila, Zeinab asked her brother to stop at Lahoud Cocktail, one of the most popular juice and smoothie bars in Lebanon. They were in the Dora area, about seven minutes from Beirut port by car. After they drank and relaxed a bit, they headed back to their car. That’s when they felt the first shock, like a weak earthquake. A few seconds later, they felt a stronger shock, as if the ground was moving and about to crack. Her brother was shouting “earthquake!” when they heard an explosion so massive Zeinab says there is nothing to which to compare..

“I thought it was the end of the world. I thought I was dying,” she recalls. “The explosion threw us in the air. We literally flew in the sky and fell on the ground.”

Zeinab’s arm broke and shattered glass sliced her head. Her brother’s condition was much better. Zeinab, her brother and many others lay on the ground, waiting for help until the Red Cross rescued them 30 minutes later.

“The sound was abnormal! It felt like a tsunami, as if fire was eating everything around us. I have never seen such a thing in my whole life. I’ll never forget it,” Zeinab told me over WhatsApp, tears streaming down her cheeks and her voice trembling, “I am still depressed and terrified even now. My whole body shakes whenever I recall what happened.”

But Zeinab says she is thankful she and her brother weren’t in the car, because the glass shattered and slabs of stone from nearby buildings fell on it. Zeinab notes that she has witnessed many other wars and explosions in Lebanon, such as the Sabra and Shatila massacre and the country’s civil war. But none was as enormous and sudden in impact as this explosion.

Zeinab adds that at the moment of the first explosion, she heard aircraft hovering and the sound of a rocket attack. Most people there, she tells me, believe the explosion didn't happen purely by coincidence. “The fuse was lit,” she thinks, by a force like Israel, perhaps in suspicion of an arms cache. But one thing they know for sure: Their corrupt government was once again careless and irresponsible, allowing a stockpile of flammable substance to sit as if ready for the first evil opportunist or simple stroke of bad luck, to which Lebanon is so vulnerable.

At that moment, however, all thoughts of who and why were fleeting. All hospitals in Beirut were crowded with injured people and some were damaged.

“The hospital where I was taken was very crowded and it couldn't handle all the casualties,” recalls Zeinab. “I stayed in the emergency room for about two days and then I was sent home to continue my treatment, even though I was supposed to stay there longer.”

She says she is still feeling fatigued. Her entire body aches as if all of her bones are broken. However, Zeinab, like most Lebanese people, assures the world “we’re physically okay.” Mentally and emotionally, they are devastated.

Shatila camp, which is 20 minutes away by car from the port, was also affected. Zeinab says the walls and ceilings of most of the poorly built buildings in the camp, including hers, are now cracked.

Beirut is no longer the same. Zeinab says it’s as if each building, store, street, etc., had its own separate explosion. As someone who grew up hearing explosions and children crying, as well as destruction and blood everywhere in my hometown, I can relate to the steadfast people of Beirut. Each picture, each tear, each wail, each loss reminds me of my people after each Israeli assault on Gaza. I still remember how the Lebeanse media united to send love and support for the Plestinians in Gaza during the 2014 Isareli war on the Strip. Their normally highly competitive television stations expressed their support and love by airing a joint newscast titled, “Palestine, you are not alone.”

Gaza and Beirut have so much in common, especially regular and periodic attacks by Israel. They are both well known for their people's resilience. They both inhale the sea breeze. They both sing and dance dabke despite the pain. They both start their morning with the beautiful voice of Fairuz and the aroma of falafel, zaatar, labneh, olives and a steaming cup of tea. They both have a deteriorating economy and a high rate of unemployment and youth emigration. They both grow very dark at night due to persistent electricity cuts.

And they both are bleeding. The two cities’ logos are also the same: the phoenix. We will rise again.