Eavesdropping on a bus

Home » Eavesdropping on a bus 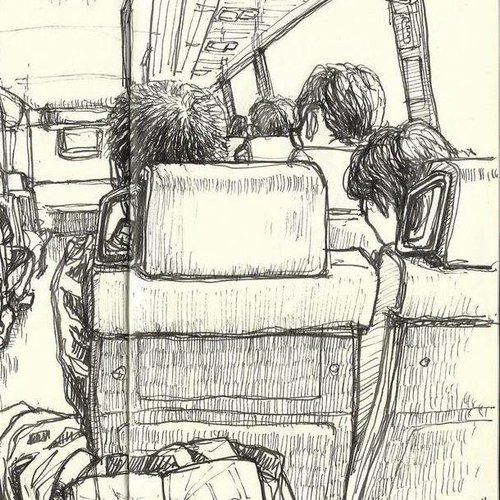 I am from Gaza, currently studying and teaching in Chile. One of the principles of good storytelling taught by We Are Not Numbers is to be vigilant; "everything is a story waiting to be told," we are taught. As I rode on bus one day, I imagined the lives of the people around me. Try it!

Before starting his day in the early morning,
the bus driver fought with his wife,
for not being financially wise.
She fled angrily toward her family’s house,
with tears in her eyes,
leaving behind four sons, two daughters and a baby.

Not caring about her tears, the driver starts his day.
A high school student is his first passenger.
The boy smiles pleasantly, gives him two dollars and sits.
He soon is joined by an old woman.
In a deep, husky voice, she tells him tales
about her granddaughter who is his age.

“She is tall with blonde hair and brown eyes,” she says.
“She will study medicine at college soon.”
“I am sorry, ma'am; I am in love with someone else,” he disappoints her.
“But I have no problem with getting to know her.”

In front of him is a kid with headphones in his ears,
listening to English music, not knowing the lyrics.
His mother is beside him, scrolling on her mobile.
She chats with someone on Tinder. He is rich and handsome.
“That’s what I want,” she whispers to herself.
Her marital status on her profile is single with no kids!
She gets mad when her husband calls to ask her what food to bring home.
The seat behind her is empty. Passengers avoid sitting on it;
there are drawings of human organs drawn by teenagers.

The back seat of the bus is wide like a bench,
where a man sits with his beautiful wife.
She falls asleep on his shoulder. He takes out his cell and messages someone at work.
“Uff, the scorpion sleeps. I love you more,” he woos his colleague,
while holding his wife’s warm hand.

Beside the couple, a swaddled baby sleeps.
No one has discovered it yet, but he became parentless today.
His mother left him because she does not know the father.
A young man in his 30s takes a photo of the baby,
posting it on his Instagram account with 9,800 followers.
For him, it’s a find since he wants to attract more.

The bus is full, but the driver wants more passengers.
An old man gets in, but can’t find a seat.
Thinking he will be treated with respect, he stands beside a young boy
wearing Beats Studio headphones.
The boy looks at the old man while chewing gum.
Ignoring him, he turns up the music’s volume.
The old man is tired. He almost faints.

The driver argues with a woman in a torn dress.
She looks in need and poor.
She wants a ride for free, to visit her husband at the geriatrics hospital.
The driver refuses, ordering her off the bus.
Praying for the other passengers will travel safely, she gets off!
She wonders why hearts are blackened, stony, hard…