A day in Gaza: A date with Santiago & the sea

Home » A day in Gaza: A date with Santiago & the sea 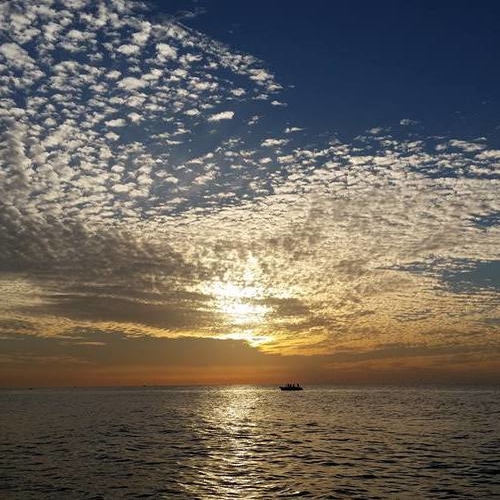 It was so tempting to keep sleeping when I woke up this morning. In the winter, my pillow feels softer, my blanket seems warmer and more cozy, and my room’s sky-blue color looks more soothing and welcoming than in the summer. It is a Sunday, meaning I don’t have to go to work and I can sleep as long as I wish. On drowsy mornings like this, I feel the urge to write a philosophical essay on how sleep is the best form of happiness, freedom and love. Yet I didn’t think many philosophers would agree with my theory, nor have I found enough evidence to support my claim.

In the middle of wondering whether I should get out of bed instead, I smelled my mom’s bread loaves she was baking. Poor mom had to wake up early to bake using the stovetop oven before the power shut off for the day. Her loaves smelled so sweet and fresh, and yet they also seemed to invite me to crawl back to bed. A funny thought came to mind: Does my mom put some kind of drug in the dough, to lull us all to sleep? Because my father is so picky and hard to please, that thought seemed actually possible for a second.

After I’d officially woken up, I washed my face, brushed my teeth and had my breakfast like a good boy. I have a part-time job, and need only to visit the office three days a week. But because I love the company of my coworkers, I decided to go to work even though it wasn’t one of my days. My coworkers are like family and my office more like home than work. Before I left home, I called a fellow student from my university who had been asking to see me. We arranged to meet on my way to work, and he talked aimlessly about midterms, the coming finals, which teachers were good and which were arrogant. It was light and entertaining, but I noticed he kept asking me about my work, how much I earned and my future plans. I began to realize that he hadn’t wanted to talk just to have a little company. He was worrying about his unknown destiny in the midst of large-scale unemployment in Gaza. He was looking for a reason to hope. I did my best to encourage him and went on my way.

As soon as I reached the office, my colleagues told me they were throwing a surprise birthday party for my cute boss. Although I knew about her birthday, I had completely forgotten about it and was so glad I had decided to come. Everyone was excited about trying to make the party a real surprise. Being the naughty person I am, however, I jokingly told my colleagues I was going to spoil it and tell her. “Anas, please don’t do that,” they begged. “Don’t worry guys. Anas is kind and wouldn’t do that,” one of my coworkers, Mohammed, interrupted. “You don’t know me,” I replied, half seriously. “I’m the devil in disguise. I’ll make a deal with you. I won’t tell her if you bring me a Coke and a box of chocolate.”  They agreed with a laugh.

Maha, my boss, had left the office with Dina, our “spy.” In their absence, we blew up balloons and brought out the cake and presents, impatiently awaiting the “we-are-coming-back-to-the-office” message. When Maha came back to find what we’d done for her, she was very surprised and happy, and so were we. The joy and satisfaction I saw in her eyes and the excitement I shared with my colleagues made me so grateful to have this job and this “family.”

Around 5 p.m., two of my coworkers (both named Ahmed) suggested we hang out—just what I had hoped for. They suggested going to a restaurant but I insisted on walking to Almena, Gaza’s seaport. The sea is where I feel most “in my element.” I feel like I have so much in common with it—changing moods so frequently, and hiding so much beneath its surface. Sometimes, I sense the sea understands me, like it’s part of my identity. That’s why I bought a fishing rod during my first year of university—to be closer to it.

My friends agreed. Because we were hungry, we bought some cheese and mortadella sandwiches, roasted and salted watermelon seeds and Coke from a small corner shop to eat by the sea. And then…I suddenly noticed the poems God was writing on the sky. I was captivated by its beauty and immediately took my cell phone out of my pocket to take photos. I left my friends, forgetting about them for half an hour while I stared and photographed.

This is my favorite picture. What came to mind was Santiago from Ernest Hemingway’s “The Old Man and the Sea.” When we studied the novella in school, I felt an affinity with the character of Santiago and wished/thought I was him. The passage I will carry with me forever is, "But man isn't made for defeat. A man can be destroyed, but not defeated."

Seeing the boat on the water reminded me of the tribulations Santiago suffered while he tried to catch the massive marlin—his old age, the rough circumstances and surroundings and the sarcasm and mockery of the other fishermen. But he emerged victorious in the end. As a Gazan, I relate to him. Old age is often assumed to be a reason to stop working as hard, and it is sort of the same for Palestinians and their “aging” fight for independence. Yet Santiago didn’t believe that and neither do Palestinians. The stormy weather, huge waves and harsh circumstances faced by Santiago resembles the daily situation in Gaza: poverty, unemployment and inability to travel due to the Israeli blockade. The mockery and sarcasm of the other fishermen is like the propaganda Israel spreads to detract from our story. As I remembered Santiago’s victory, my heart filled with hope and belief that our struggle will not last forever and peace will someday come.

At first, the clouds in this photo look shredded and torn apart by the wind. But I find the scene beautiful and meaningful. I think of it as one very dark, heavy, bottled-up cloud that finally scatters into pieces—like a release from pain. In Gaza, there’s a thousand reasons for one to fall apart, and everything can seem depressing and disappointing. Fortunate and smart are those who can see the beauty amidst the chaos and pain. Yes, there’s pain in life, but there also is life in pain.

As if to emphasize my previous thought about the beauty of pain, the sky blushed pink as sweet as cotton candy immediately after.

Then the sunlight slid away. As winter approaches, the sky looks cold and starts weaving a blanket for itself. Or maybe she has woven it to provide support and sympathy for those who are homeless, who don’t have the comfort of a blanket.

On that note, I rejoined my friends, who got over their annoyance at my abandonment when they saw the peace on my face.

We picked up our things, and started home.