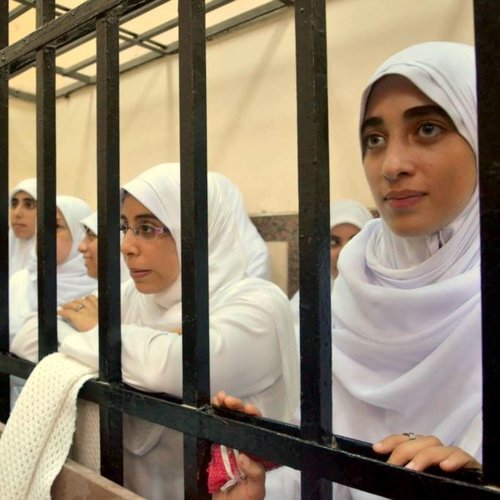 This is the second in a two-part series on why people from Gaza and elsewhere try to emigrate no matter what the dangers, how they do it and what can happen. Read the first post here.

Eman, who asked that her full name not be used, left her house with her husband after selling all of their property and borrowing money from their relatives. She set out on what they hoped would be a journey to a new life. Eman never thought they would end up in a prison in Egypt. This is her story:

In the days before the 2014 war, my husband was working in a shop and I couldn’t find a job, although I have a bachelor's degree in English. We were happy, though, because we were expecting our first baby in a few months.

During the (2014) war, my house was full of people who came to escape from the shelling. Later, we received news that the shop where my husband worked was destroyed. Those were dark times. Then my husband's friend told him about a way to leave Gaza and travel to Italy. We knew lots of people had gone there. We thought long and hard about it, and we decided it was our only chance to have a real life, and ensure a future for our baby.

The first thing my husband did when we reached Egypt was to call his friend, who gave us the number of Abu Hamada, the man who was supposed to take us to Italy. Abu Hamada told us to come to Alexandria. When we reached the city, we paid him the money [US$3,000 for the two of them] and started our journey the next day.

We leave for what we hoped would be our final destination, Italy

From Alexandria, we were taken to the seaport of Marsa Matrouh. It was a four-hour trip and we passed through four or five checkpoints. Whenever anyone asked us why we were traveling, we said we were on a tourist trip with the charitable Al-Resala Association; we were told to say that. I was in the first bus, which passed easily. But the young men in the third bus didn’t have passports and they were the ones who, we learned later, informed on us.

It was 2 p.m. as we waited in a cafe near a desert. We were tired and [the smugglers] said we would wait for half an hour only. At 8 p.m. another bus came and we all had to cram into it. Then rode again for an hour, until the bus finally stopped in a desert near the border between Egypt and Libya.

A group of Bedouins were ahead of us, and there were people from Syria and Sudan as well. The land was full of rocks. Suddenly, we saw some lights and we were told to hunch down. The lights were from police cars that had brought a big trailer to put us in. The families couldn’t run, so they obeyed; the youth ran and and my husband and I ran with them. We ran in the desert and the roads were difficult.

It was dark. We laid down on the ground every time light from the  Egyptian police flashed in the sky. I couldn't lie on my stomach due to myy pregnant belly, so I laid down on my back. We were all cautious. Then policemen started to to look for us.

I whispered to my husband, who was lying next to me, "I can hear a voice; there is a car coming closer."

He whispered back, "Don’t raise your head or they will see you; don’t move.”

But I knew that even if I didn’t move, they were coming closer. Suddenly we heard a voice with an Egyptian accent saying, “Stop here, all of you.”

A dash to escape

Everyone started to run, and I was among them. I lost my husband, and I couldn't find anyone else either; I was alone in the desert.

Not knowing where to go or what to do, I moved quietly, hoping to escape from the police. I saw some houses from afar and hoped to spend the night in one of them until I found my husband

I saw three men in white talking to a policeman. The officer asked if they had seen any of us, and they said no. But later, when the policeman left, it was clear they had lied; they knew I was there. I saw them searching for me. They didn’t seem friendly or nice. I felt in danger and I knew if they found me something bad would happen to me. There was no place to go except a small building with a water pump. I ran, hugging myself because of my heavy pregnancy. I reached the room, closed the door and hid there. I looked for my mobile phone; lucky me, I still had it after I lost my bag somewhere when I was running from the police.

I was shaking and breathing heavily when my mobile rang; it was an Egyptian number. I answered and it was my husband asking where I was. It seemed that when I ran and lost my bag, my husband found it. When he started to collect the stuff that fell out and put them back in my purse, the policemen found him. I told him what happened, and he and the policeman with him told me to wait for them because it was dangerous for me. They called me later and asked me to step outside a little so that they could see me.

It was my good luck they found me, because the three men in white were very close to where I was hiding. I rode in the police car with my husband, still hoping we would find a way to travel.

It was 3 a.m. when the police took us to an Egyptian army station to spend the night until we signed some papers the next day and were transported back to Alexandria. We were optimistic; we thought we could  look for another way to emigrate.

It was a big complex; men and women slept in separate rooms. I remember the soldiers were good people; they gave us their blankets and food for the night. They took our passports, which we had covered with nylon to protect them from the sea. The next day a policeman came and said we were going to the deportation department in Marsa Matrouh.

Crammed with people next to me, behind me and in front of me in an open-air truck full of Palestinians, Syrians and Sudanese, I felt like I was dying. Children were screaming out of hunger or because they were hot or suffocating. We prayed for all of this to end soon.

For an hour we were in the truck, until we finally arrived at the deportation department. The police brought us some cake and told us not to worry.  Then they said let's all take a photo as a souvenir!

After that they took our mobiles and our money and jewelry; we were still thinking these were only procedures and we would go back home. But after that they took us to a place with four rooms: Two of them were for Egyptian criminals and the other two were for us. They put women and children in one room, and men in the other.

At that time, we knew we were in prison and we didn't have any means to tell anyone about us. There was an open bathroom and the smell was unbearable. The water wasn’t clean as well and there wasn’t even enough.

The women were in a room that was open because of the children. We kept hearing insults from the criminals in the other two rooms. They were shouting at us all the time. The men were crammed in their closed room; one of the men suffered from diabetes, but the police refused to give him insulin.

We discovered one of the Syrian women hadn’t given up her mobile phone, so she called her relatives and told them about our condition. Then UNRWA people came and they gave us food and blankets, which had been stolen by the army.

My family was worried about us, and they called the [Palestinian] ambassador [in Egypt] who found us after we had been in prison for two weeks. After that we were deported to Gaza, and since then have been on the blacklist [banned from entering Egypt again].

Who is Abu Hamada?

It seems everyone I interviewed about trying to emigrate talked about Abu Hamada as the main smuggler who facilitated their travel abroad. His identity is not secret on the Internet. Abu Hamada is originally from Syria, but due to the war there he came to Egypt and started this business.

He apparently owns a building in Alexandria. He is about 40-50 years old. His photos are online everywhere. His phone number is available, although when a friend of mine called it for me, no one ever answered. However, despite this public persona, the Egyptian police haven’t caught him yet or charged him with anything.

One can ask: Why doesn’t anyone care enough about those who died, or disappeared or are now in prison to pursue Abu Hamada?